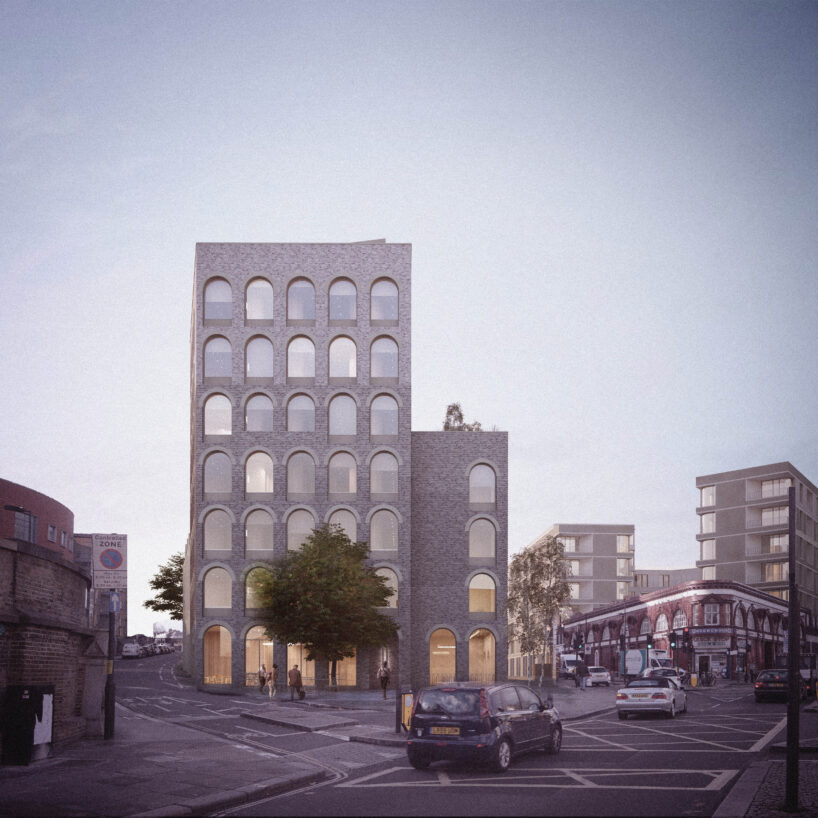 Piercy&Company’s vision for a new hotel in London’s Chalk Farm has been granted planning approval by the London Borough of Camden.

Commissioned by Henigman, the Roundhouse Hotel is the official hotel partner of London’s iconic performance venue, the Roundhouse. It is the first hotel designed by Piercy&Company in Camden with a design informed by the studio’s intimate knowledge of the area, having been based there for seven years.

As the official hotel partner of the Roundhouse, the partnership anticipates a meaningful contribution to the local economy by providing high-quality hotel amenities for the cultural venue’s guests, visitors and performers and publicly accessible cafe-bar facilities in the centre of Chalk Farm.

The project has evolved from a rigorous research-based approach with particular consideration of the site’s context and history. Its new all-day active use open to the public on the ground floor activates a currently disused area of outdoor public realm, measuring 2,529 sq ft. This follows the tradition of Camden Town’s expressive corner buildings, which are often highly public, including the former Camden Theatre on Camden High Street (now home to music venue KOKO).

Through investigating the site’s history, Piercy&Company also found that a former pub and hotel - the Adelaide Tavern - used to occupy the site in the late 1800s before being demolished in the 1980s to make way for the present-day mixed-use building, which currently offers little public engagement at street level.

In recognition of Camden’s significant role in music culture, this outdoor public realm will be re-paved with a design inspired by artist Michael English’s posters from the 1960s when Camden was at the height of its experimental music scene.

Like many of the industrial buildings characteristic of the area, the building’s function is expressed through the external facade by Victorian warehouse-influenced arched windows arranged to reflect the order and size of the hotel rooms inside. The scheme features light buff brick detailing organised by colour and tone and pre-cast concrete lintels, inspired by architectural details found within the Roundhouse, the Interchange Building on Regent’s Canal and the material palette of the area.

The resulting design aims to contribute to the area’s rich cultural heritage and look to both Camden’s history and future through its architectural expression.

Stuart Piercy, Founding Director of Piercy&Company, said: “It is a privilege for my studio to contribute to the culture of Camden by designing the Roundhouse’s affiliate hotel. Located between the listed performance venue and Chalk Farm Underground Station, the building is designed to respect the rich architectural landmarks whilst also relating to the emerging context of the Roundhouse and Camden Goods Yard. The choice of a light-coloured masonry and subtle detailing creates an overall softness and tactility whilst also creating a contemporary interpretation of the light industrial viaduct. By redesigning an area of poor public realm that surrounds the publicly-accessible cafe-bar on the ground floor, the building will encourage public use of the hotel’s amenities and contribute to the vitality of the neighbourhood.”

Dean Main, Chief Executive, Henigman commented: “ We are delighted to be working with the very talented team at Piercy&Company in order to deliver a much needed hotel which will support the Roundhouse and the wider Camden community. Camden Town is one of the UK’s most visited tourist destinations and yet currently there are very few hotels in the area, so the arrival of The Roundhouse Hotel will be a very welcome addition, not just for visitors but also for the local community. As a resident of Camden, I am particularly excited to be part of something which I believe will significantly enhance the appeal of this much loved part of London and in so doing will create many new job opportunities”.